All You Need To Know About Hungarian Food

All You Need To Know About Hungarian Food

Traditional Hungarian cuisine is a reflection of the country’s nomadic medieval past as well as culinary influences of neighboring countries that gradually seeped into the mainstream food traditions. For example, Hungarians have been eating a form of goulash for over a thousand years, but other dishes like stuffed peppers, schnitzel, strapacky, and cholent were more recently adopted from Ottoman, Austrian, Slovakian, and Ashkenazi Jewish cuisines, respectively.

Hungarian food received a big boost in the 15th century when King Matthias married Beatrice, the daughter the King of Naples. Through Beatrice’s connections Matthias, a renaissance man, brought Italian chefs and with them a host of new cooking techniques and ingredients to Hungary. In addition to refining the royal kitchen, he also planted Burgundy vines across Hungary – he was a great man.

While the Turkish occupation that soon followed ended Hungary’s independence for centuries to come, it also brought forth important culinary innovations. The Ottomans introduced new techniques and foods like flatbreads and stuffed vegetables, and this was also the time when New World ingredients arrived to Hungary including tomato, corn, and paprika. Paprika went on to revolutionize the course of Hungarian cooking. It largely replaced spices like saffron, ginger, and pepper that had previously dominated Hungarian flavors, and its various subspecies ranging from sweet to very hot are to this day the core of everyday Hungarian cooking.

In the meantime, French cooking methods spread into aristocratic households and later throughout the country. These had a moderating effect on the often overspiced Hungarian peasant fare and created a more subtle yet still distinctively Hungarian cooking style that’s regarded as the basis of modern Hungarian cuisine.

Given the small size of Hungary, differences in regional cuisines aren’t significant. One exception is the food of Transylvania. (The region today is part of Romania with a sizeable Hungarian community.) With a colder climate and a multiethnic society comprising Hungarian, German, and Romanian communities, Transylvania was always different than the rest of the country culinarily and otherwise. Paprika couldn’t really take root there, and other spices like tarragon and marjoram remained more prevalent. So did polenta, cottage cheese of sheep’s milk, sour cream, and even buffalo milk. Kürtöskalács, the chimney-shaped spit cake sold out of food carts in Budapest, is also from Transylvania.

Traditional Dishes
Most lunch meals in Hungary begin with soup. It’s an essential part of the local cuisine with an array of delicious seasonal variations. A hearty bean soup with smoked meat and sausage would be appropriate in the cold months, whereas lighter, often could soups like a cold cherry soup dominate summer menus.

Meat is fundamental to Magyar cuisine and most dishes would be unimaginable without them. The options are almost boundless, spanning from poultry (chicken, duck, geese, and turkey) to veal, beef, and to a lesser extent game and game birds. But pork is dearest to the hearts of Hungarians, and it appears in a myriad permutations in restaurants. Higher-end establishments are fond of Mangalica, the curly-haired delicacy with a tender meat and rich flavors, but sausage and blood sausage remain as popular as ever among everyday locals (preferably paired with crusty bread fresh out of the oven). Some of the best sausages are served at Belvárosi Disznótoros, a cheap downtown eatery.

Foreigners rightfully associate Hungarian flavors with the three traditional stew dishes: goulash, pörkölt, and paprikash. Goulash, a spicy broth cooked in a heavy iron kettle with morsels of beef inside, is the reviving soup Hungarian shepherds have been eating since medieval times. Pörkölt is a similar dish but without the broth, served with egg dumplings instead. Chicken paprikash is a sweeter, creamier version with sour cream and a little flour mixed in the sauce. All three of these peasant fare are still popular throughout the country, and most of the traditional restaurants, and everyday Hungarian eateries will serve at least a couple of them.

Bear in mind, as you screen for seafood on restaurant menus, that Hungary is a landlocked country. It doesn’t mean that you can’t find outstanding grilled shrimp cocktails these days, but dishes with freshwater fish, like ponty (carp), harcsa (catfish), fogas (pike-perch), and kecsege (small sturgeon), are more common and likely fresher. And while fish in general is not the strongest part of Hungarian cuisine, the fisherman’s broth is a classic paprika-laden spicy fish soup made of carp or catfish that’s worth trying (Rosenstein Restaurant makes an excellent good one).

Hungary’s continental climate is home to a rich crop of vegetables. Rather than simply reducing them to boiled or steamed side dishes, many households use seasonal vegetables to make inventive main courses. Unique to Hungary is főzelék, a dish of vegetables stew often topped with meat or hard boiled eggs. Squash, lentil, spinach, potato, and sorrel are the most popular főzelék varieties. As cheap sources of energy, they used to be essential staples for Hungarian farmers. While currently a bit out of fashion, you can still find them in most everyday eateries in Budapest, which you should visit in any case for the experience. Similar to other Central European countries, cabbage is also an elemental part of local food in Hungary: it comes in a multitude of variations, but cabbage rolls (cabbage leaves stuffed with minced meat and cooked together with sauerkraut) are the favorite and the most commonly found.

Desserts
Perhaps surprisingly, some of the best food in Hungary are the hot noodle and dumpling desserts. They look similar to their Italian sisters, but in Hungary most of these are served sweet. Two of the most famous are the császármorzsa and the túrógombóc (cottage cheese dumplings). And make sure not to miss the savory túrós csusza, a staple in every Hungarian household, which is baked al dente noodles and cottage cheese, topped with sour cream and pork cracklings.

Palacsinta is another standout in most Central European families. It’s a thin pastry similar to crepes and usually filled with jam, cinnamon sugar, or sweet cottage cheese. A special type is the Gundel palacsinta, which is filled with ground walnuts and draped in a rich chocolate-rum sauce served hot. It was named after Károly Gundel, the famous Hungarian restaurateur and the dish’s inventor.

Strudels And Cakes
Once in Hungary, be sure to try the local strudels. Strudel-making was elevated to an art during the Austro Hungarian Empire, and these layered pastries are still going strong (the strudel technique was adopted from the Turkish in the 16th century). Paper thin strudel sheets enclose a beautifully rich cherry, sweet cottage cheese, or apple filling (adventurous types should try the classic cabbage version). In downtown, you can sample outstanding strudels at Strudel House, or visit Rétesbolt Anno 1926 in the outskirts of the city if you’re very serious about your strudels. Vargabéles is a special kind of sweet noodle cake/strudel with a cottage cheese filling – don’t miss it if you see it on restaurant menus.

Hungarian cakes are rich, sophisticated, and impressive-looking. Many of them came to Hungary through France and Austria, but were then further improved and embellished. Dobos, Esterházy, krémes, Rigó Jancsi are all delicious and considered to be traditional Hungarian cakes. And Somlói Galuska, a moist sponge cake sprinkled with nuts and smothered in chocolate sauce and whipped cream. That’s right. To try these, or any other Hungarian cakes and small pastries, visit one of the confectioneries/pastry shops scattered throughout Budapest (cakes aren’t generally available in restaurants). Ruszwurm or Café Gerbeaud, both of them legendary Budapest confectioneries with excellent cakes, could be good options as long as you don’t mind a tourist-heavy crowd.

Restaurants With Hungarian Flavors
Over the last several years nothing short of a gastronomical revolution has been initiated in Hungary, particularly in Budapest. Although we still love beef stew with a generous serving of egg dumplings, healthier food and smaller portions (and slimmer menus) are becoming more widespread. These new-wave restaurants generally blend traditional Hungarian flavors with contemporary international culinary techniques, using fresh ingredients which were once impossible to find but are now more readily available. To experience the best of modern Hungarian cuisine, try any of these restaurants. If old-school, traditional Hungarian cooking is more your pace, then see our toplist of the best options in Budapest.

Italians have their osterias, the French their brasseries. In Hungary, no-frills eateries whose main purpose is to fill your stomach with familiar flavors at affordable prices are called “étkezde” or “kisvendéglő”. They belong to a bygone communist era, and many trendy people avoid them like the plague. But they shouldn’t. A few of the best étkezde have managed to survive amid a stampede of new restaurant openings, and usually for the right reasons. These are the best ones. 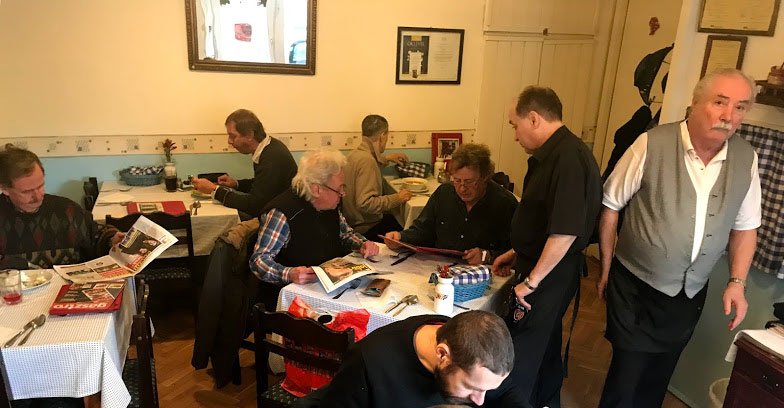 Fine Dining
4 Michelin-starred restaurants operate in Budapest (more than in each of Prague and Warsaw). While ticking the boxes of haute cuisine with texture plays and unexpected flavor sensations, most of these restaurants also give a tip of the hat to some Hungarian classic dishes.

Additionally, Budapest has 3 restaurants with Bib Gourmands, a Michelin award provided for exceptional food at moderate prices: Petrus, Fricska Gastropub, and Stand25 Bistro. As for Gault Millau, in 2017 they rated a total of 15 restaurants in Budapest with 15 points or above. Most of the fine dining establishments are located in District 5 (downtown), close to St. Stephen’s Basilica. For the city’s best fine dining restaurants, see our toplist.

Food Courts and Food Trucks
The Hold Street market hall has been transformed into a popular food court featuring a plethora of fast casual lunch eateries. These places are run in a self-service manner by some of the leading chefs in Budapest (e.g. Tamás Széll and Lajos Bíró). I especially recommend the ratatouille sausage with onions and mustard at Séf utcája, the enormous pork schnitzels at Buja Disznó(k), and the lunch prix fixe at Stand25 Bistro. The market hall itself is worth a visit, it’s a recently renovated 19th century steel structure erected during the glorious days of the Austro-Hungarian Empire. The Anthony Bourdain-visited Belvárosi Disznótoros eatery is operating at a different location but in similar vain, serving all Hungarian essentials.

Food trucks and carts have steadily begun to emerge on the streets of Budapest. Being clean, using quality ingredients, and taking their time to prepare the food, they tend to be a bit more upscale than one may have previously experienced, but aren’t meaningfully cheaper than regular restaurants. A dozen or so food trucks are parked inside a courtyard called Karaván on Kazinczy street, near Szimpla ruin bar, and happily serve the crowds of tourists passing by. 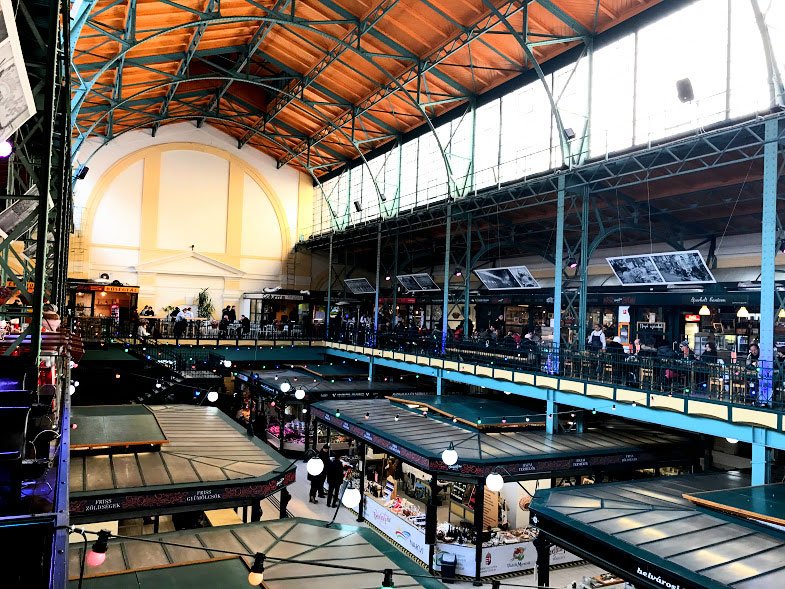 International Food
The international food scene in Budapest is dominated by cheap, low-quality gyro joints. The expansion of these self-service/take-out type of eateries across the city appears to be unstoppable, but you will do yourself a favor by not visiting any of these (the notable exception being Gyros Kerkyra).

On the higher end of the international food scene, there’s a growing group of restaurants which work to meet the standards of serious gastronomes. Italian places are most prevalent (see the best Italian restaurants in Budapest), but excellent Japanese (see toplist) and Indian (Curry House, Indigo) flavors can also be found in Budapest.

The Chinese food landscape in Budapest is more than meets the eye. The city is teeming with uninviting but economical buffet-style Chinese restaurants, offering dirt-cheap food of questionable sanitary conditions. There do exist, however, excellent Chinese restaurants in unexpected parts of the city (“the farther from downtown, the better”, appears to be the rule of thumb). Most of them are in Monori Center, a long stretch of wholesale stores in District 10 run by Chinese business owners, and exclusively cater to Budapest’s 30 thousand-member Chinese community. Remember, Chinese dinners generally start on the earlier side (around 6 PM), so, for the fullest experience, plan accordingly.