Hungry in Hungary: Budapest is a new foodie capital

Budapest is swiftly transforming itself into a foodie capital. John Brunton tucks into the best dishes at the hippest restaurants in the city, before burning off the calories visiting the sights and several spas.

Budapest is one of Europe’s hottest destinations right now. Lauded a century ago as the glittering Paris of Mitteleuropa, the capital of Hungary is in the midst of a new renaissance, with its sumptuous turn-of-the-century palaces brought back to life as luxurious hotels, along with a foodie revolution sweeping through the city from gourmet restaurants to funky food trucks. There are cutting-edge art and design projects springing up in everything from ruined mansions to abandoned factories, a hip nightlife scene that rivals London or Berlin, while the city’s iconic thermal baths, which have been the favourite pastime of locals for 500 years, are being spruced up and transformed into modern spas without losing any of their unique charm.

Added to this, Hungary remains outside the euro, keeping prices down and making Budapest incredibly affordable, be it to reserve at an ultra hip B&B like the Brody House (guests get free access to their exclusive private arts club) or one of the many opulent hotels that partially inspired the recent movie The Grand Budapest Hotel, such as the Gresham Palace Four Seasons or the palatial Corinthia Grand. Today, I’m standing at my favourite spot in the city, the middle of the immense Chain Bridge, built in 1849 by a Scottish engineer as the city’s first permanent link across the Danube, the river that neatly divides this imperious city into the stately royal castles and churches of medieval Buda on one bank, from the splendid neo-gothic Hungarian Parliament and the belle-époque architecture of bustling downtown Pest on the other.

I’m waiting for my tour guide. I usually avoid guides, but Zsuzsanna Szoke, from the unconventional Underguide, has intrigued me. She offers something very different, first sending visitors a detailed questionnaire about their interests and then creating a made-to-measure tour. The last time that I was here, I was underwhelmed by the cuisine, so I wanted to find out what was happening behind this latest buzz. Szoke arrives looking like a bubbly young Annie Hall and explains her philosophy: “You need to know about the culture, the arts, the museums, but I prefer my visitors to actually meet real people that live in Budapest – shopkeepers, artisans, chefs, an artist, a fashion designer. My tours are like a pizza, where you tell me what toppings you want to add.”

First stop is the magnificent Central Market, which Szoke explains has become one of the city’s prime tourist attractions, like Barcelona’s Boqueria. The vast glass-and-metal hall is teeming with shoppers crowding round the hundreds of stalls stocking the surprising specialities of Hungarian gastronomy – goose and duck foie gras, paprika, wild mushrooms and truffles, smoked meats, carp and perch-pike thrashing around in glass aquariums and irresistible multicoloured jars of pickled cucumber, cauliflower, tomatoes, garlic and lethal chillies. The market’s top floor is taken up by casual buffet bars serving traditional Hungarian home cooking, and the aisles are packed with locals and tourists tucking into goulash soup, fozelék (a delicious vegetable stew), paprika-roasted chicken and halászlé (a spicy fish soup). But before I can order anything, Szoke whisks me off to meet a couple of rising-star chefs. We squeeze into the Bors Gasztrobár, a tiny hole-in-the-wall diner that has been packed since it opened earlier this year. The two young chefs, George and Tamás, serve tempting vegetarian dishes, a dozen different homemade soups and exotic baguettes, and explain how “we got our fine-dining experience abroad working in Salzburg and Dublin, but always preferred bistro and street-food ­inspirations”. 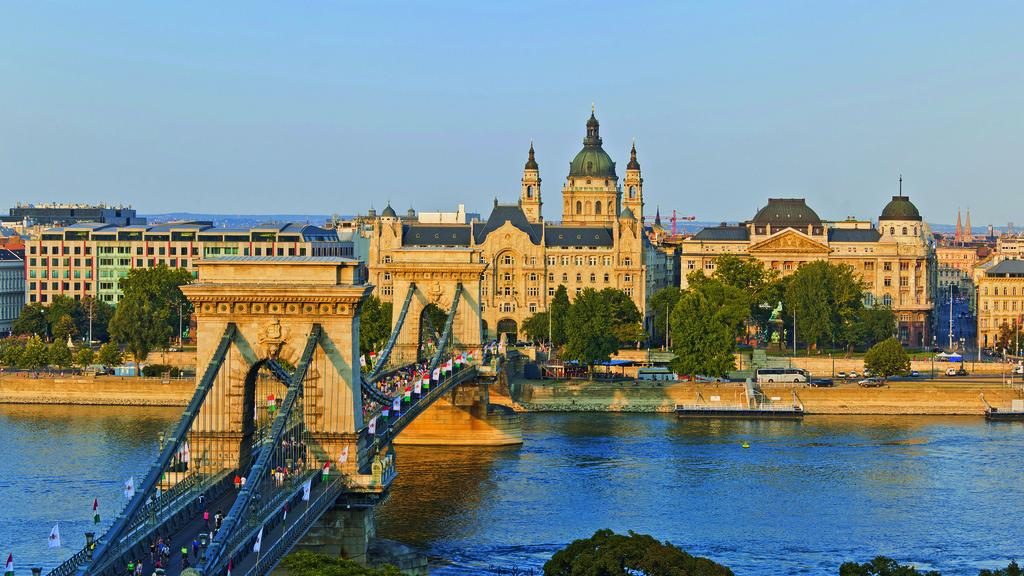 And it’s a combination of this that’s sweeping through Budapest. For example, just next door is Szimpla Kert, a legendary bar that began the fashion of Budapest’s famous “ruin pubs” – taking over abandoned buildings, decorating with tatty flea-market furniture and creating a unique, anarchic space. Now, every Sunday morning, it’s transformed into an organic farmers’ market, with dozens of stalls selling healthy, creative dishes.

It’s the same story when we visit one of the city’s new food trucks, The Legenda, parked outside Gozsdu Passage, a labyrinth of fashionable restaurants that’s filled with thousands of partygoers every night. Trying a vegetarian burger filled with crunchy, grilled red peppers and delicious melted gomolya cheese, another young restaurateur, Kósa Kolos, insists, “there is a gastronomic revolution going on. It has taken us a long time to break out of the communist food system, when all restaurants simply offered the same old menu of stodgy dishes. Now, young chefs are travelling abroad, learning new cooking technology, then returning here to open restaurants that are reinventing Hungary’s great culinary heritage.” And all this is proved true as we move on for lunch at Borkonyha – the hottest reservation in town, as it’s just won a Michelin star. With a friendly, unpretentious bistro ambience, Borkonyha serves modern Hungarian cuisine like duck foie gras seared with cinnamon and sour cherries, juicy roasted rabbit, rosemary and savoy cabbage or salmon trout served on a bed of fava beans and raisins. As we make a series of gourmet pit-stops, it just gets better. First Strudel House takes the Habsburg speciality to new levels, filling delicate, wafer-thin strudels with asparagus, spinach and creamy leeks, spicy chicken or curd cheese. Next door to the bustling Hold Street market, Kispiac has a menu that changes daily depending on what its chefs find in the market, cooking up a hearty tripe goulash, salmon tartare and a simple but intense beef consommé. The city is definitely on its way to becoming a foodie capital.

Budapest does have a lot more to offer than food, and to burn off all the calories, the next day I set off on some serious sightseeing. Many visitors head straight for the Buda side of the Danube, the ancient birthplace of this city, where you can spend the whole day in the maze-like museums of the Royal Palace perched atop Castle Hill, follow the crowds to Fisherman’s Bastion for the ultimate city views and imagine how the ornate Matthias Church must have been when the Turks ruled Buda back in the 16th century and converted it into a mosque.

I prefer to stay in Pest, kicking off with a leisurely stroll along Andrássy Avenue, known as the Champs-Élysées of Budapest. Every building oozes belle-époque opulence, from the imposing Opera House and the intricate mosaics decorating the facade of the Fotógaléria museum and the Liszt Academy of Music, with its lavish, art-nouveau interiors that attract as many visitors as its reasonably priced concerts. Up on the first floor of the Alexandra bookshop, in what was once the Párizsi Nagyáruház (opened in 1910 as Budapest’s first luxury department store), is one of Andrássy’s hidden secrets, the Lotz Hall, a lustrous literary cafe with glittering chandeliers and flamboyant ceiling frescoes, perfect for hot chocolate and ­sachertorte.

While Budapest is a great city for walking, it also has excellent public transport, and everyone should take the historic Metro Line 1, one of the world’s oldest undergrounds, unchanged since it opened in 1896 and classed as a Unesco World Heritage Site. I jump on at the Oktogon Station and follow a crowd of local schoolkids out at Hosök Tere (Heroes’ Square). Hungarians are patriotic and they always outnumber tourists at this awesome monument, erected in 1896 to celebrate the Magyar Millennium, honouring every significant king, saint and national hero – a mix of Trafalgar Square and the Arc de Triomphe. On either side of the square is the Museum of Fine Arts, filled with work by old masters from Breughel to Da Vinci, and the Palace of Arts, devoted to avant-garde exhibitions and installations. A narrow bridge leads straight into Városliget Park, where you can go cycling on the city’s new free rent-a-bikes, boating on the lake or, in winter, ice skating. Looming over the park are the immense towers and battlements of the medieval-looking Vajdahunyad Castle. Although it looks like a tacky Disneyland, this is actually a faithful reproduction of parts of Hungary’s most famous castles and churches, yet another remnant of the Magyar Millennium.